Virginia Looks to Pull Ahead in Driverless Cars

By 2035, 21 million driverless cars could be on the road, according to IHS Markit. In the midst of that boom, Virginia Gov. Terry McAuliffe is pushing policy that aims to make the state the autonomous vehicle capital of the U.S.

“We are going to bury those other 49 states,” said McAuliffe in Arlington Thursday during a workshop on autonomous vehicles hosted by the Secretary of Transportation.

The state has already enacted legislation announced in 2015 that opens more than 70 miles of interstates and arterial roads to automated-vehicle developers to test and develop these technologies. These areas, known as Virginia Automated Corridors, allow “connected-vehicle capabilities enabled by dedicated short-range communications and cellular technology [as well as] access to sophisticated, unobtrusive data acquisition systems,” according to the press release.

The state also boasts two autonomous vehicles that Virginia Tech and the Virginia Department of Transportation are currently testing, and McAuliffe says the state is open to owning its own fleet in the future.

“The technology is going to make us safer, let’s be clear. You’re not going to have people in cars driving, texting and doing everything else,” said McAuliffe, noting that nearly half of all accidents are related to excessive speed and alcohol use. “Cars aren’t stopping off and doing shots of whiskey.” 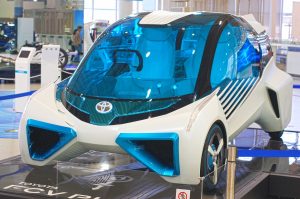 Extract of article by Juliet Van Wagenen – Original write article on StateTech can be found here.