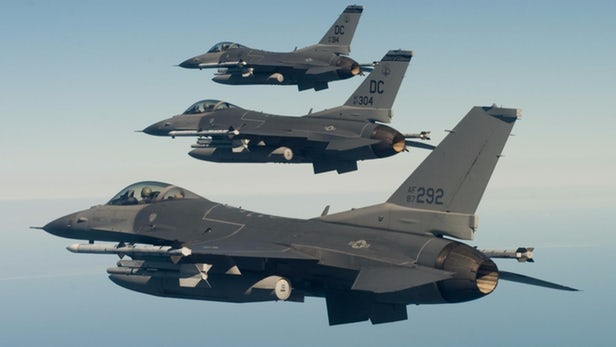 It seems like unmanned combat aircraft are coming at us from two different directions. While some aerospace companies are building prototype combat drones, others are converting retired fighters to act as unmanned testbeds. Now Lockheed Martin Skunk Works, the Air Force Research Laboratory (AFRL), the US Air Force Test Pilot School, and Calspan Corporation have collaborated to demonstrate how an autonomous F-16 can team up with manned aircraft during air-to-ground strike missions.

The first converted F-16s were produced by Boeing in 2013, and now Lockheed is using the surrogate Unmanned Combat Air Vehicle (UCAV) in aerial combat exercises to demonstrate how autonomous fighters can plan and execute air-to-ground strike missions. It was required to adapt to its mission priorities and what assets it has available, react to threats during an air-to-ground strike mission, deal with equipment malfunctions and communications failures, and rapidly accept new software components.

According to Lockheed, this was the second such demonstration. The first was Have Raider I, where an autonomous F-16 showed off its advanced vehicle controls, including the Lockheed Martin automatic collision avoidance systems, by flying in formation with a lead aircraft, carrying out a ground-attack mission, and then rejoining the leader.

The latest demonstration, Have Raider II, was conducted over a fortnight period at the Test Pilot School at Edwards Air Force Base, California. The purpose of the program is to develop autonomous control technologies that will allow the human pilots in a fighter formation to concentrate on complex executive decisions while leaving the unmanned aircraft to react to threats on their own.

This article is reproduced from the newatlas.com website and all rights belong to them.